This page is a work in progress, I wanted it published while I write it though. Think of it as a livestreamed publication. (it is currently unedited and may contain grammatical and spelling errors)

Over the past month the Zoom video conferencing application has piqued the interest of the security community due to its global adoption during the NCOVID-19 pandemic. This article attempts to cover a missing piece in the analysis of the platform; the Linux client.

The development of proprietary software for the GNU/Linux platform has always ended with users distrusting the security and stability of the application in question. This usually stems from Linux users' support of free open source (and therefore verifiable) software. As you will see, this distrust may be well placed. This article will cover some trivial issues with the Linux version of the client. Whether or not these findings count as vulnerabilities depends on the more creative folks of the security community.

The Zoom client for Linux had several debug scripts and applications left in the package. These are dead code, uncalled by the application. This doesn't stop the user from calling them.

Zoom has multiple launcher binaries. Let's take a look at the .desktop file to see what launcher gets called when a user chooses it in a menu.

Here we can see that /usr/bin/zoom %U is used to launch the Zoom client. We can also see some interesting mime-types being set to handle zoom:// URLs. The question is, what binary is that at /usr/bin? Let's find out.

Here are our choices of binaries:

And here are some sha256 sums to figure it out:

Looks like /usr/bin/zoom is a copy of ZoomLauncher. You will see later why this is important. First thing to do is open up the 1.2M ZoomLauncher executable in radare2 and see what we can find.

Running ZoomLauncher from a terminal gives us some interesting output:

The launcher starts be reading and setting some environment variables. It does this by executing bash one-liners. These scripts are stored in the ZoomLauncher binary:

These seem to be used as arguments for some function. We begin to see the large amount of system profiling the Zoom client does. It is important to note the launcher's use of breakpad (the variable BREAKPAD_CLIENT_FD makes this obvious). It is possible all of this system profiling is just a component of breakpad that may or may not be used.

The launcher is not stripped, allowing us to get a better understanding of how it uses these strings:

The first thing to look at is what functions utilize these strings. There is a particularly interesting one-liner in the strings that, depending on how the data returned is used, could make the zoom client believe an impostor process belongs to it:

This returns the PID of every process with the name zoom. Let's see how it is used in the binary. Looking at references to the string at 0x00426190 we find the following: 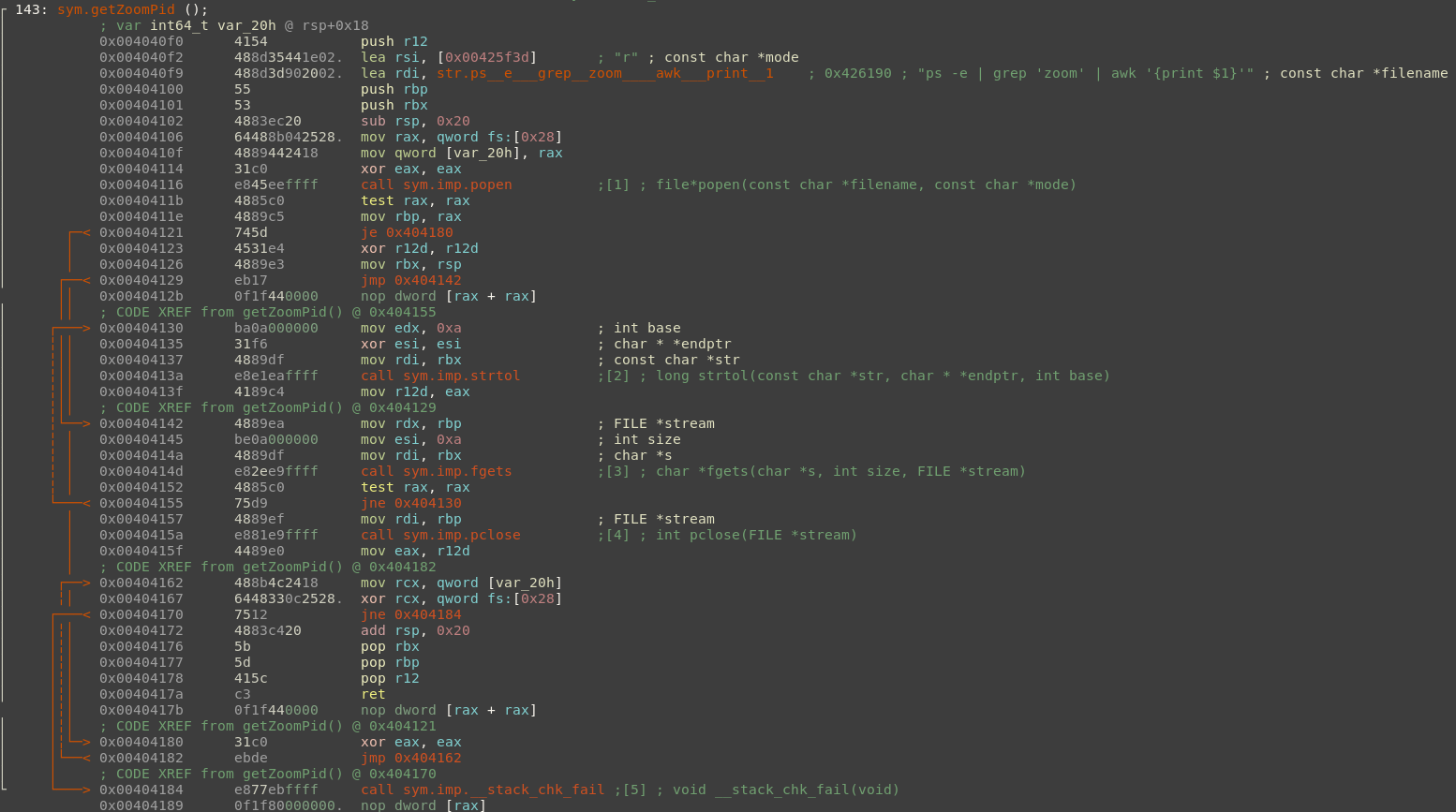 The one-liner is executed via popen(). The client then parses the output of the executed one-liner and stores it in a long int using strtol(). By following the cross references we can see where this getZoomPid() function is called: 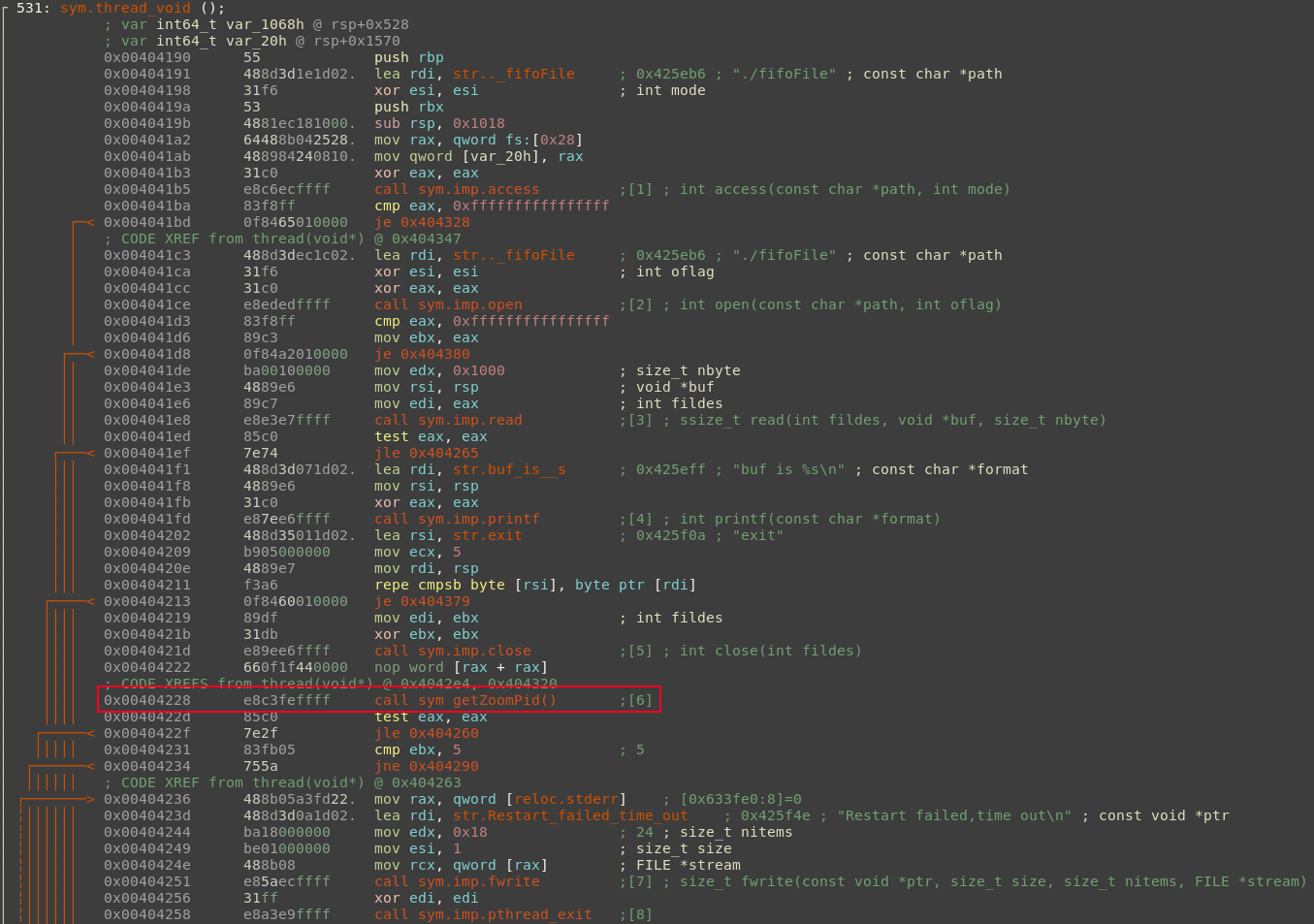 The PID returned by the getZoomPid() function allows the launcher to determine if an instance of the Zoom client is already running. We can also see that the launcher attempts to do something with a file called fifoFile during this code flow. I could not obtain a copy of this file while testing but I suspect it is similar to .pid files used by daemons to determine if an application is already running.

Because of the lack of checking in place, any process with the name zoom can count as a Zoom client process. We can trivially block this functionality into a fail state by running a dummy process with the name zoom before the launcher is called. It would be much better to make a call to getpid() or pidof() as well as some simple analysis of the calling binaries' path to determine if the process actually is a Zoom client. We can use the following code to attempt to block the launch of the Zoom client:

This program will simply sit and wait for the specified amount of time. This is what we get if we run the program after naming it zoom like so:

Success! we have blocked the launch of the Zoom client. A trivial DoS.

In our previous analysis, we found an interesting string further into the main thread's code:

And indeed we can trigger this flow by attempting command injection on ZoomLauncher:

This is due to the launcher not including backslashes in its injection detection routine. I suspect this is for compatibility with Windows paths, which aren't used and shouldn't be in use on Linux. Unfortunately after hours of messing with this particular vulnerability I never achieved code execution. I did however, find a particularly odd issue. The issue occurs when you overrun the buffer of the launcher arguments. The launcher has a particularly horrible design where it concatenates all of the arguments passed to it, separates them with spaces, and sticks them all into the same length limited buffer. It then passes this buffer as an argument to the Zoom client. It breaks a length check in an odd way if you split exactly 4096 characters across two arguments. It breaks in the example shown below because of a simple programming error where the length is checked for each segment but does not include the spaces. For example, the two commands shown below have the same length when concatenated but are measured wrong by the code:

The math for the calculation looks something like this:

Because the first example is a single argument this check works just fine, but when there are multiple arguments, like in the second example, the launcher first does the length check for each argument, then concatenates the arguments adding a space in between each one. We can overflow the array with the following code:

Notice that odd path at the bottom which was never part of our input. This is interesting, but not worth hunting down.

You can download the Zoom client for Linux from: https://zoom.us/download?os=linux